It’s all about the questions

It’s all about the questions

Our school has implemented two big and a couple of smaller GID units this year.  My dear friend Paige Holden has already blogged about an 8th grade research unit that our school planned and implemented as a result of attending the GID training.  I would like to talk about one component of a larger unit that I will never forget.

7th grade students learned about the civil rights movement by asking difficult questions.  During the identify phase of the unit, 7th grade English classes came to the library to read articles about different events that happened during the civil rights movement.  We had between 90-105 students who rotated through 10 stations over the course of 3 days.  Each station was equipped with several copies of an article about a particular civil rights event.  Each station had a large piece of butcher paper and markers. Students read the article with their group and wrote down facts, questions, thoughts, impressions and comments about the articles.  All adults that were there (we had some teacher illness, library meetings, and various other stuff that pulled us in different directions) wandered between groups and entered discussions as needed. 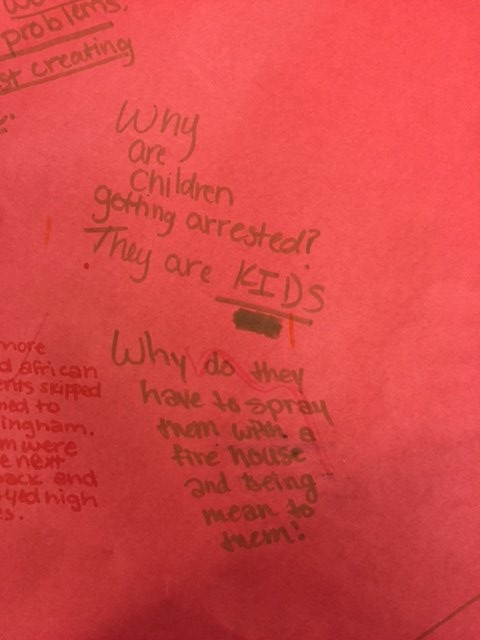 The three classes weren’t used to being mixed together, so the kids were pretty excited.  It took longer for them to settle into class than I thought it would.  The first day of the identification wasn’t quite as productive as the other two, but we as educators learned a lot and were able to make some adjustments that helped.  We erased or crossed out all of the illuminati symbols that the kids drew, looked for naughty words, and gave lectures about the appropriate use of markers (they shall not be thrown like darts at your neighbor).   The next two days were quite incredible.  The comments and questions that the students had were so mature and interesting.  My favorite question was “Who came up with racism?  Why not white people rather than colored?”.  I read it over and over and over and over.  I felt like if one kid gets it to this extent, that we had done a great job.  I continued reading and there were many great comments and questions with such depth. 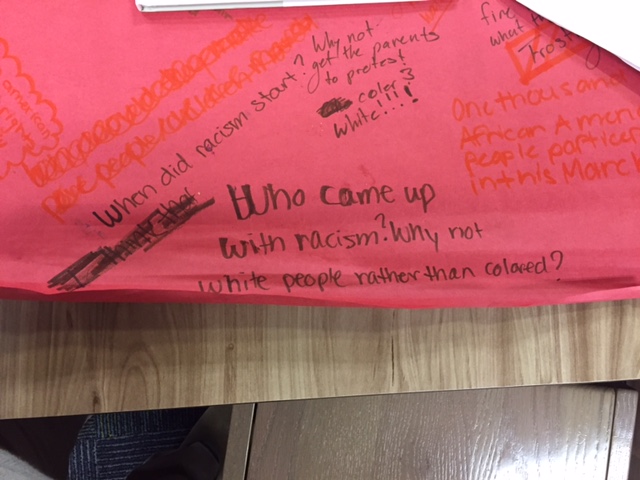 We left the comments and questions out for all three days so all of the classes could read what other students were thinking.  Here is an example of what the papers looked like at the end of the third day. (The back is completely full, too.) 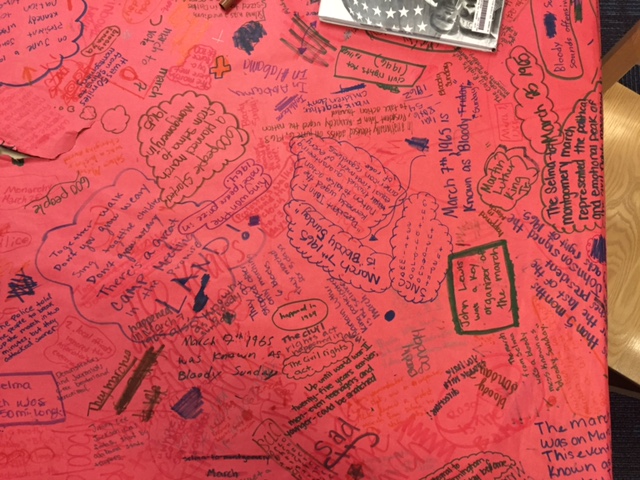 As you can see, some of the comments were reporting dates, names, events, etc., but for me, I think the beauty lies in the questions.