Today, we’re continuing the journey with a middle school team who is studying the Tulsa Race Massacre of 1921 with their students.

I’ll be telling the story of some brave teachers who used Guided Inquiry Design to plan a unit that would open their hearts and minds to their students and build an awareness of the seeds of racism and bias- assumptions.  Through the concept of Assumptions the team used the book Dreamland Burning and built a unit of study that ushered these 8th grade students down a path of understanding, empathy and discovery.

Here, we’ll share, what they did, how it went and the teacher’s stories of the experience in their own words.

There were lots of lessons learned, including a growing interest and need to include this important work in all students experience, so that we all learn together about racism and begin to stop the pathway to hate.

One big thing I took away from our conversations is…

As a Teacher, It’s OK to not know.

As a teacher today, who hopes to prepare our students for the now and into the  future, it requires being willing to step out of our comfort zone to take some risks.  This was a big risk, as some teachers didn’t even know about the event when they went into planning.  So how do we do that?

We have to start with our mindset.  What kind of mindset does a teacher need to teach difficult aspects of our history? polarizing topics that might be viewed as controversial? and topics that might even be challenged by parents or the community?

When I worked with the team and even in my reflection conversation with them afterward, I called this team of teachers brave. They rejected that title.

First you have to know that they felt compelled to do this work and learn with their students. They felt an obligation to teach this.  Once they themselves learned of what happened, they felt it was essential that their students not be sheltered from the information and history as they once were.

Here’s how the librarian described it. 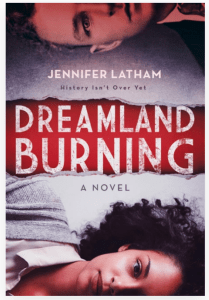 “From the outset, this topic felt deep and heavy, but necessary for these students (and us, the teaching team, in general). We knew from the discussions around Dreamland Burning that we wanted to dive into the Tulsa Race Riots (as they are commonly referred to, but later we morphed that language as we found more and more reporting/references/research using Tulsa Race Massacre).”

This team took on a learning stance from the VERY beginning, an inquiry mindset about the topic, what they would be teaching and even how it came across to students.

They didn’t know everything about this topic, they were just learning about it themselves. One teacher, Kelli, said, “When Trecia first mentioned getting class sets of Dreamland Burning, I was intrigued and curious myself because I had never heard the history of the Tulsa Race Massacre before.  As I learned about it, I was disgusted and ashamed of the history.  In the fall ‘19 semester, Trecia and Morgan introduced the novel through literature class so I read the novel after they started.  It was awesome.  I devoured it in like, two days or something.  Trecia told us the kids were asking hard questions and she was tackling them as they came up.  There were a lot of “I don’t know” answers.”  Kelli Goodnight, English Language Arts Teacher

These teachers were OPEN to learning with the students.  Their inquiry stance made a big difference in how the material came across to the students.  They went beyond being open to it, to being compelled to it.

Carol, the librarian, remarked,  “The author Jennifer Latham would say that when she went to the Greenwood Cultural Center there was a portrait of a survivor who “had eyes that followed her” and compelled her to tell the story. It literally seemed that way for us, with this unit.  We were compelled to share it with our students.”

As Heather (one of the English Language Arts teachers) and I discussed as we designed the unit, we actually talked fairly in depth about what the main point or research question or driving issue would be for the unit.” Carol Jones, Shawnee Middle School Librarian

Guided Inquiry Design uses a concept-based approach to help teachers reach an inquiry stance in the content that they teach.  The design institute helps them to move from teaching topics to designing learning around concepts.  During the Shawnee institute, this team grappled to determine the concept that was right for the learning that they were hoping would take place.  They wanted to lift up the truthful history and move it into the lives of the students today.  You can hear the librarian describing the possibilities of many topics that they could have gone with to frame this unit.

“I think we found a really great general but necessary issue that can be translated into almost any thing where students can dig deeply into an area where they feel discrimination is happening. I believe discrimination was one of the topics we considered.  We also considered inequality, conflict, power, differences, and a few others. But in the end, we decided it was really even bigger than that, Assumptions.”

Moving from teaching content to teaching concepts has had a huge impact on how teachers view their role in guiding and facilitating students’ learning in GId.  If we take the approach that we are teaching topics, we tend to cover content.  In the Information Age- everyone can find the information.  What’s more important today is for students to analyze and apply ideas to their lives and into the future.

Concepts lead teachers to assume an inquiry stance.  And having an inquiry stance helps educators to think outside our content and into the world.  It opens up the content we teach to new levels of curiosity and paves a way for the students to grab hold of part of it.

After working and talking with these teachers, I raved about how brave they were for being white teachers doing this work with a mixed population of students. But they themselves didn’t see it that way.  They insisted that it just felt like they were doing their job and what should be the job of teaching.  Our work as a teacher, is exposing our students to information they may not uncover on their own, giving them a platform to analyze and think about it with their peers,  in a safe community, and finally provide ways to act on what they learned that connect to their lives.

We can all learn from Kelli’s  attitude of open-minded risk taking.  Just because you do not know everything about something, doesn’t mean you cannot lead students into an investigation of it.  But in order to do so, you have to be open, willing, and have an “I want to learn with you. Let’s find out together.” stance. (Kuhlthau, Maniotes & Caspari, 2012)

So, we turn it back to you, the reader, how do you open the learning to your students?