In this second post of my week in 52 weeks of Guided Inquiry I want to tell you about some of the observations I did during experimenting Guided Inquiry in Finland. As I wrote to you my background is in school libraries. In Kaarina city I had collaboration with two schools, where I connected with two teachers who were eager to try out new ways of working. One of the schools were Finnish speaking and the other was Swedish speaking. With the latter school we had already done a project for a national reading program in form of a reading diploma with exercises done also with a tablet computer.

In these two schools we tried out GI in following groups and subjects:

Information literacy is used in universities, but the concept has not reached the primary or secondary schools in Finland. Information seeking instruction or information literacy instruction are not a part of teacher studies per se. Surely teacher students are seeking information for their own needs, but it is another business to instruct the students at class. Information seeking instruction is quite often considered to be the job of a librarian. And it is usual, that in the 7th grade a librarian comes to visit the class for 45 minutes during the year to show how the local public library database works. We do understand, that this is not enough. It is usually not combined to some actual learning situation. This is not advancing the information literacy skills of the Generation Z or post-millennials, whose understanding of information environment is totally different than those of the previous generations. We clearly are in need of other kinds of methods.

You have surely been reading about the Finnish schools during the years: Why are Finland’s schools successful?

Finnish education chief: We created a school system based on equality. 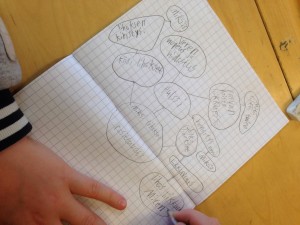 And an American on Fullbright scholar in Finland 11 ways Finland’s education system shows us that “less is more”.

I am not going to go into how Guided Inquiry would change the education as such but rather concentrating on how this would change our perspective of information seeking in Finnish schools. I will not refer to any studies in this blog post. Several of my writings in my own blog refer to same sources. There are several studies that are showing that students tend to look for facts and also, teachers tend to make assignments so that one can carry it out by finding facts. We all know that the digital native reference is a myth and thorough deep information seeking is not common in daily classroom situation in Finland. I often like to refer to the ‘Principle of least effort’ by Zipf in 1949 as well. It feels oftent that the result is more important than the journey.

Here are a list of some observations I want to take up:

But, then positive things from the feedback questionnaires.

These were the major issues I wanted to take up. The overall feelings of trying out Guided Inquiry were very positive and supportive, both from the students and the teachers. Me as the librarian in the project just loved working like this! Being among the students, involved in their work, guiding them and making an intervention when needed. Giving the student the freedom of doing research, they do manage it. In my mind Guided Inquiry is an excellent way of working, already from the primary school all the way to gymnasium. Now even more important than before.

In the third blog post I will tell you about the educational change we are going through in Finland, about the new core curriculum, and how do I see Guided Inquiry fitting in. And it would fit perfectly!