The week of the RUTGERS CiSSL Institute has arrived!

The week of the RUTGERS CiSSL Institute has arrived!

This week is a big week for Guided Inquiry Design.  Beginning on Wednesday CiSSL is hosting on the Rutgers campus in New Brunswick, NJ the 3rd Guided Inquiry Design Institute.  Our bloggers this week are the leaders at CiSSL, the director of the program, the facilitator of the learning and a researcher who is joining us from Finland!  See you on the back porch! 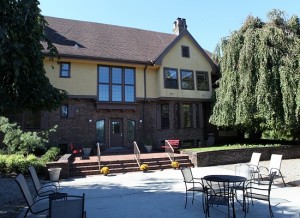 Back Porch of the RU Conference Center

The stage is set! The program has been finalized, the books have been delivered – even the nametags have been printed. We are ready for the 2016 CiSSL Summer Institute at Rutgers University! Sponsored by CiSSL, the Center for International Scholarship in School Libraries, this year’s institute will be the fourth one to focus on Guided Inquiry for student learning.

Guided Inquiry Design (GID) has deep roots at Rutgers, growing out of the internationally acclaimed Information Search Process research of Dr. Carol Kuhlthau and the third space work of Dr. Leslie Maniotes. It calls for a team approach involving teachers, the school library media specialist and both internal and external resources.

From the beginning, the team approach has been a key feature of the Institute structure. Teams that have been selected to attend have included a teacher, a SLMS and (whenever possible) an administrator. Some teams have come with a great deal of experience in GID and others are just beginning their GID journey. Regardless of the level of experience they started with, they left the Institute with a heightened degree of enthusiasm, motivation, and tools to employ. Many of these teams have gone on to win awards and to share their experiences in various forums. Here are some of their stories:

Sarah Scholl and Sarah Wein of Havre De Grace (MD) Middle School implemented the unit “Challenge and Change” that they designed at the 2014 Institute and won a district award for Outstanding Curriculum Enhancement for that unit. They also presented at AASL 2015.

Anita Cellucci and the team from Westborough (MA) High School have integrated Guided Inquiry Design into Physical Science for all 200 freshman, as well as a unit in humanities, language arts and a special project on empathy. Anita also presented at AASL 2015.

The Newport News (VA) Public Schools Guided Inquiry team revamped the district inquiry process to align with Guided Inquiry. Mary Keeling, Patrice Lambusta and her team presented the implementation of Guided Inquiry across K-12 at both AASL 2013 and the CiSSL Symposium.

The team from the Tamagawa School near Tokyo, Japan implemented Guided Inquiry Design into the Science program of the middle and high school that was presented by Professor Yumiko Kasai in a workshop for librarians and teachers in the Pacific Rim on Guided Inquiry Design at the 2013 IASL conference in Bali.

Past institutes have attracted participants from over a dozen states and several countries including Australia, Canada, China, and Japan; this year’s Institute has a similar distribution of participants. We are expecting teams from Connecticut, Florida, Kentucky, North Carolina, Texas, Wisconsin, and, of course, New Jersey. In addition, we will have a team from Malmo, Sweden and a researcher from Turku, Finland.

One of the most rewarding aspects of the Institute has been the opportunity to build relationships with educators from other parts of the country and the world. Fortunately, now we have the 52GID Blog and other social media outlets to keep the conversation going. 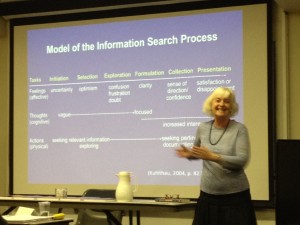 Dr. Carol Kuhlthau telling the story of the ISP – CiSSL 2014

With all of this to look forward to, it’s no wonder that we can’t wait for this year’s institute to begin.