Keep Going! – Change the culture of schools to develop conversation

Keep Going! – Change the culture of schools to develop conversation

Between 2000 and 2010 I told teachers and students about ISP. We tried in all kinds of ways to adapt what we learnt from it in our information seeking instructions, in our supervision and in the instructions that the teachers gave to the students. We were convinced that it should inform our practice. We made many mistakes. We thought we knew, over and over again. But since the students kept getting more or less impossible assignments and I knew that they wanted us to be kind and needed us to understand their “non-library” questions we learned and learned and learned.

In 2010 I got the chance to get to know Randi Schmidt. The story is long about how this meeting came about but it contains my story with ISP as you’ve read it above, people in Sweden whom I had found and networked with, coincided with financial possibilities and Randi´s and my conviction that ISP/GI really had it. I don´t know if Randi is known to you but my short version of her goes like this: When she found out about ISP she decided to create a program at her school (Gill St. Bernhard, Gladstone, NJ ) that would fully implement the findings of the research – her practice should be based on research. And that she did.

Ten years later I walked into that library. I came as prepared as I could and the ten days that I spent with her, her colleagues, students, teachers, researchers at CISSL and the colleagues that I travelled with from Sweden equipped me with a massive experience. It was just as holistic as the voices I heard from my informants only that the web was getting even more complicated. But there were connections, there were methods, there were forms to be filled in and reflection sheets, structured lessons and instructions and there were questions answered and I saw it all, it wasn’t just talk but also walk.

During my visit I asked myself: what am I going to do with this when I come home? I just thought it would be so sad if I would plant the seeds but then fail to make them grow and flourish. It would be so sad. I wanted so badly to be part of a listening and encouraging culture that would help both grownups and teenagers to create deep knowledge.

So I asked for advice and thought and read my own notes from the trip and the ISP/GI texts over and over again.

I decided to trust conversation and discussion.

I don’t think that we have that as a natural part of our culture in my school when the intention is to develop professional knowledge in the staff.

And I decided to challenge that.

I decided that it was the only way to go and that I knew that I had to be patient and firm. If I or the teachers assumed that we were getting nowhere, nothing was happening I had to remain in the position of a discussing, conversing person. If that didn´t work, nothing else would.

I started by talking to my principals and somehow they must have experienced that there was something – not clear what – of quality in my sayings and doings and a year later I had a full time job. Still unclear what I was doing or should be doing, but there it was.

My vision was not to become a star school librarian but to teach the teachers and then work together with them. In 2013 I had evaluations from teachers, their voices and student voices from six projects, involving about 200 students and six teachers and I was invited to present as a practitioner at the CISSL Symposium celebrating the 30th anniversary of the dissertation of Dr. Carol Kuhlthau.

I flew to the US to talk for 15 minutes. It’s kind of funny to think of it that way, but of course there was so much more to it. I was back at Gill with Randi, I met with new people, learned that my presentation and the result we had was worth something – we were on the right track – and that there was interesting stuff going on in Australia as well. So, going back home again, what next?

I went back and told my school and anyone else that was interested that those who know say that we’re on the right track. We don’t really know what we’re doing but people who know say: keep going. So we did. 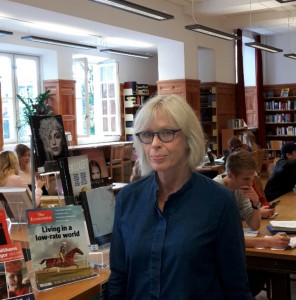 Lena Fogelberg Carlsson in her library