Culturally Responsive Inquiry: The Middle of the Process – Research Phases

Culturally Responsive Inquiry: The Middle of the Process – Research Phases

Thanks for coming back to the blog.  In this post we’re continuing with the story of the Middle School Guided Inquiry Design Unit on -Dreamland Burning Tulsa 1921 Massacre. Today, we’ll describe what happened in the middle of the GId Process! Carol Jones the librarian worked closely with the teachers to implement the phases in the middle of the process.

If you know about Guided Inquiry Design, we place the focus on student learning.  Using GId, educators design  units of study using what we know about how students learn from information from Dr. Carol Kuhlthau’s research. 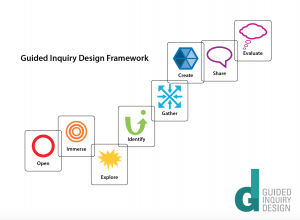 Where we’ve been- Unit in Review

We have already described the first two phases of this unit, where the teachers open the unit, and Immerse the students into the events of history.  Next, the students return to the concept around which the unit was designed, Assumptions.  Remember in the first session the students thought about assumptions together.   Then they examined assumptions in the book, as they read the novel Dreamland Burning.  Then they learned the hard truths and facts about the Tulsa Massacre that were introduced in the novel.  They extended that knowledge to consider how assumptions might have played into the violence that occurred. Next, they’ll have time to Explore some ways that assumptions can cause pain, suffering and even violence.

The Unit Design- The Explore Phase

For the Explore phase the librarian, Carol Jones created a wakelet (a tool for curated web based resources) on the concept of assumptions.  The team wanted the students to explore assumptions from multiple perspectives to determine an aspect of it that interested them for a deeper dive and research.  Rather than continue to investigate the Tulsa Race Massacre, the teachers wanted the students to reach into their future and learn about something that they could take action on, in their own lives.  Assumptions about others seemed to be a good place to start.  The team wrote on their unit plan that “false assumptions can lead to violent acts.”

In the Explore phase the students looked at the concept of assumptions from many perspectives as they browsed a set of resources, stopped to think about what parts were interesting to them, and how assumptions played in their own daily lives.  The curated set included lots of videos of TED Talks from many different perspectives of people talking about assumptions, like the Danger of a Single story. and many other examples of people who broke away from who you might think they are.

The students discussed their ideas as they browsed the set of articles, videos and more in Inquiry Circles.  The conversations allowed them hear from their peers about how the concept of assumptions was resonating with them. These conversations continued to build the Inquiry Community as everyone was coming together on one big idea to study.

The librarian guided the students by providing a mini lesson on keyword searching in Explore so students could also explore outside the curated set once they got some ideas of their own.

Progressing from Explore into Identify

After a few days of exploring the students use the chart to decide protocol in Guided Inquiry Design on page 98. In Inquiry Circles students work together again to talk and think about the ideas they have recorded in their Inquiry Journals and to help each other determine a direction of high interest. This protocol moves them out of Explore and into Identify.

The librarian and teacher conferred with each student after they had created a chart of what they were interested in working on.  The topics that the students chose were as varied as the students themselves.  They were looking to investigate things like

These are just a few of the topics that came from that group of students.  What a range!  You can see that they did get the Third Space in their wonderings.

Once the students decided their direction, the students went back to the wakelet and the library catalog to search for information on their topic.  In Gather the librarian taught lessons on plagiarism and citation as students began to take notes and cite sources that they wanted to mention as they shared their information with their peers.  Once they began to see how their topic was shaping up the librarian helped them to organize their time by giving them a timeline of the project and a question source outline structures.

The librarian helped students during the Gather phase by providing mini-lessons on finding credible sources, and how to cite the sources used.  The teachers created a form for students to use to gather information thinking about claims and evidence to help them create a logical path with their findings. 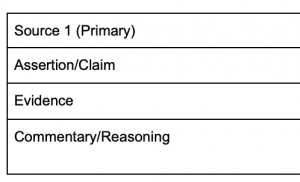 In our next post we’ll share what they did with their new thinking, how they shared with the Inquiry Community and how they concluded the unit.