Hello, again! I’m back to talk your ear off about our current unit.  (Warning: I anticipate that this post will be considerably lengthier than my first!)  I want to share what we’ve done so far for each phase of the unit, as well as my reflection on what worked and what I might do differently next time.  But first, a little background.

As I said in my first post, this is my fourth year at Whittier.  Perhaps my favorite thing about our school is that we get to work with such terrific grade-level teams.  I was especially grateful for this my first year (because let’s be honest- I had absolutely no idea WHAT I was doing).  I was lucky enough to have a seasoned veteran teacher on my team- whom I had student taught under the previous spring- and she let me come into her room on our planning period every single day to go over lesson plans in meticulous detail. (Shoutout, Leah! I’m eternally grateful.) Unlike most first year teachers, I didn’t struggle under the burden of designing my own curriculum- it was there, ready and waiting for me.  Together with the rest of our team, we made some changes over the next few years (as all good teachers do), but one thing that remained was our research unit.

And what was that, you  may ask?  The short answer (and I know, because I typed the long one and then realized how boring it was, AGAIN) is career research.  Students looked at the results of their Explore test interest inventory and explored a career database for jobs that were interesting to them, and then followed a formula we gave them to create a five paragraph essay about the job they chose (I’m not really sure if Explore has been a thing other places do, but it’s an ACT-aligned standardized test.  The point is moot anyway, because this year was its last year).

My first year, I had no issues with this assignment.  It seemed challenging for the kids, but I got good results, and we all moved on. But the next year, it seemed that the unit was considerably easier for the students, and (who would have guessed?) they were even more considerably less engaged.  And the NEXT year, those changes were even more pronounced.  The unit was basically cake for my students, and they were bored out of their minds (and I was even more bored grading those papers, which were all about architects and anesthesiologists, because that’s who makes the most money, of course).  I’m not saying any of this to criticize that unit or the teachers that came before us who developed it- I think it was perfect for those students at that time.  But our students are different, and it was time for us to be different, as well.

Okay. So remember those gibberish happy hour conversations with the librarians that I mentioned in my first post?  It was at one of those when I finally posed the question, “Um, guys? Do you think I could do this? Like, in my classroom?” The answer, obviously, was a resounding YES.  When I learned that I would be able to attend the GID Institute (and later, that another member of my team could attend, as well), it was agreed that those in attendance would develop an Inquiry unit around the subject of Natural Phenomena, and THAT is what I want to share with all of you, phase by phase.  However, I think I’m going to run out of room.  So in the rest of this post, I’ll cover Open, Immerse, and Explore, and in a second (and probably shorter) post, I’ll share what we did- or rather, are doing- our kiddos are in Create this week-  for Identify, Gather, Create, Share, and Evaluate. So…away we go!

Here was our starting question: What are the social, environmental, and economical effects of natural phenomena?  We structured the question this way so that students could choose one of those areas to explore further, OR those three topics could serve as a natural scaffold to students who struggled with developing their own topic.

We used the Dust Bowl as our starting point for the conversation about natural phenomena.  As Oklahomans, our kiddos have all heard at least something about the Dust Bowl, so we wanted to connect to that prior knowledge, as well as engage their hearts and minds with something that, for lack of a better phrase, hits home.  Here was our very first activity: 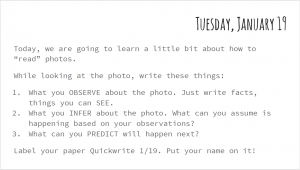 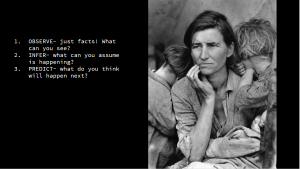 Students wrote for five minutes, and then I asked for volunteers to share.  Although Oklahoma History is technically a ninth grade course, some more advanced students elect to take it in eighth grade, and some of those knew that this was an iconic Dust Bowl photograph.  When they pointed that out, that made a terrific segue into our next Open activity, which was to watch this five-minute Dust Bowl video.

We also looked  at the following rare Dust Bowl photographs:

My kiddos were interested in the video, but they were REALLY into the pictures, especially of the ones that are of downtown Oklahoma City, since that’s so close to our city of Norman and a place almost all the kids are familiar with. After the video and pictures, in their groups, students had a conversation about how they thought the Dust Bowl affected Oklahoma, and each student wrote one of those on a sticky note.  Then they identified which of our categories it would fit in- economical, environmental, or social, and placed their sticky note on the large poster for that area.  Students then participated in a gallery walk, where they went from poster to poster to read what other students came up with.

Reflection: I was so happy with the choices our team made for Open.  The students were engaged (my favorite!) and I listened to so many conversations between students as they moved around the room.  To my recollection (it’s been a few weeks!) the only thing that presented a problem was the schedule.  We scheduled one day for Open, and we just barely had time.  In a perfect world, I would love to have more time to spend on this activity.  In my actual world, I would probably look for ways to streamline the activity to fit into that class period and adjust my pacing so the kids didn’t feel as rushed near the end of class. 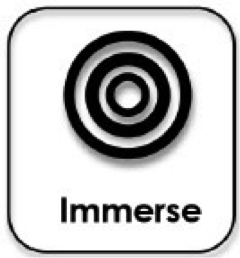 After opening with the Dust Bowl, we wanted to expose students to a wider variety of natural phenomena, as well as give them an idea of how our three areas- economical, social, environmental- come into play.  To do that, we designated three days for the Immerse phase.

Day 1: Students had bellwork immediately upon arrival to class.  They were tasked to list as many examples of natural phenomena as they could think of, and then we had a brief share out. 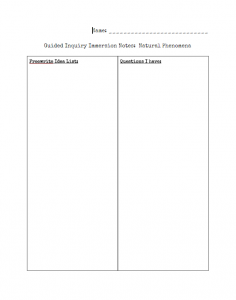 Then we looked at as many examples of natural phenomena as we could! We started with some that are more familiar and moved to more exotic examples.  All the links to articles and videos are below:

As we looked and watched, students generated as many questions as they could think of about any phenomenon that caught their attention.  Near the end of class, we shared our questions first with shoulder partners, then with the whole class.

Day 2: For our second day of Immerse, we had a panel of experts visit our school.  We had a representative from each our three areas- someone from the Weather Center for environmental, a volunteer from the Red Cross for social, and a member of the Norman Fire Department for economic.  Our experts spoke to each class period, and we combined our four classes in the library.  That gave us an audience of about a hundred kids for each presentation.  Our volunteers spoke for about fifteen minutes each regarding their area of expertise.

Day 3: Students were put into their inquiry groups and spent time reflecting on the expert panel.  They identified what they learned from each of the experts and what they were still wondering as a group, and then spent time individually deciding what question most interested them.  They wrote that question on a sticky not and placed it on the appropriate poster- social, economic, or environmental.  Students then participated in a gallery walk to observe other students’ questions. 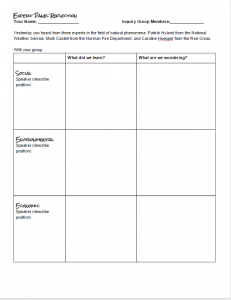 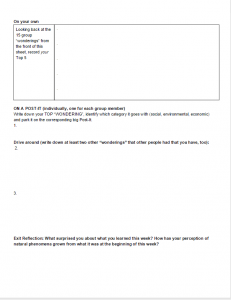 Reflection: Again, I felt like this part of the process went incredibly well.  My favorite day was day one, because the kids were so incredibly riveted by the pictures and videos.  I had reservations at first about designating three days for Immerse, but it really was worthwhile time.

Our goal for Explore was to present students with a wide variety of curated resources.  To that end, we arranged a rotation of six research stations.  For two days, students moved between three stations in a class period.  The stations were photographs, literature, internet, books, articles, and videos.  They spent a little less than fifteen minutes in each station, and the teacher at the station provided resources for them to explore.  Each student had an adapted version of an inquiry log, as seen below: 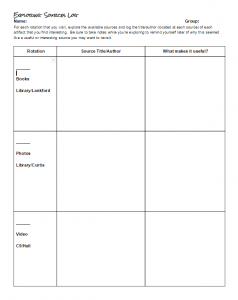 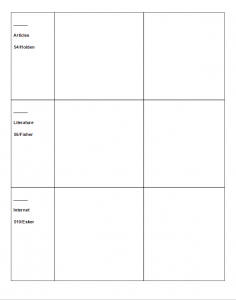 Reflection: This was a more challenging phase for me.  I do think the research stations were the way to go- we were able to focus on just one area rather than trying to teach all six, and we were able to divide our classes in half and work with smaller groups.  The challenge was the short amount of time we had with each group.  I struggled because I was teaching the lesson about articles, and they ended up without enough time to actually explore.  When we discussed extending it, the problem we ran into was that stations such as photography were barely able to feel the time they  had.  In spite of the crunched time, I’m so glad we did the research stations.  I’m not sure how we might address that next year, but I do think that we would take the same station approach.

So, there are our first three phases! As you can see, we were SO busy in class, but it was time very well spent.  Students were engaged, they were moving, they were asking questions all on their own.  I feel like the visual aides may not be of the best quality, so the link below is to the google folder, where all of these resources are stored.

Thank you so much for reading my lengthy post.  I should say that there’s no way I could have dreamed up and implemented this unit all on my own- it would never have happened without these amazing people: Jane Fisher, Leah Esker, and Adrienne Hall (8th grade Language Arts); Cynthia Charboneau (Instructional Coach), Cindy Castell (Gifted Resource Coordinator), and Kristin Lankford and Terri Curtis (Librarian and Library Assistant).  You all ROCK.  Everyone, stay tuned for part two on Thursday!