So, here is when we decided it was time to come clean with our classes- we’re going to write a research paper (which was not a decision we arrived at lightly).  I braced myself for the groans, but to my surprise, they didn’t come.  Instead, I got questions like, “You mean we’re writing about the stuff we’ve been looking at? In ENGLISH class?” I took this as a good sign, and we dove in.

Day 1: For bell work, the first thing students did was look back through everything they’d written down so far- phenomena, questions, sources, everything- and highlight the things they found most interesting.  Next, we had a discussion about different types and levels of questions.  To make this more accessible, I showed students this diagram: 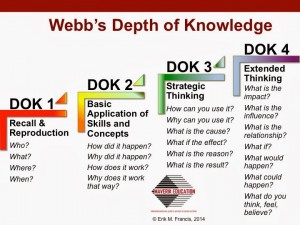 Also, I went around the room and pulled some of the questions students generated during the Immerse phase and organized them into levels to use as examples: 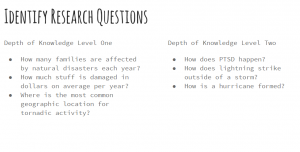 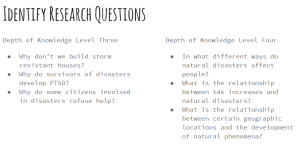 Showing these as examples broadened students’ understanding of levels of questioning.  (AND I really enjoyed being able to say, “Don’t tell me you can’t write a level three or four question! Look at the ones you’ve already written!”) We then used a version of the Criteria to Decide handout found in the book Guided Inquiry Design.  Our adapted version is pictured here: 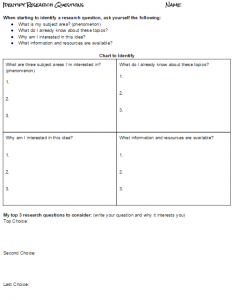 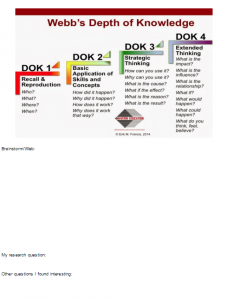 In this handout, students were asked to list three phenomena that had really sparked their interest.  We moved through the boxes as a class, listing what students already knew, why they found the topic interesting, and what resources they had already found.  In the last few minutes of class, student were asked to arrange their phenomena in order of their first choice, second choice, and third choice- and the to generate as many questions about each event as they could possibly think of.

Day 2: Today, we looked more closely at the components of any strong research question.  Students were shown some question frames and were asked to choose one of their phenomena about which to compose a question.  We did stress to them at this point that they weren’t stuck with this question. 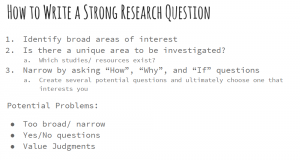 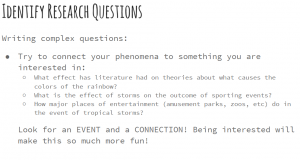 We also wanted students to start thinking about what the body paragraphs of their essay would be about (or their subtopics, as we call them).  To get there, I modeled webbing as a brainstorming strategy, and we constructed a web together as a class: 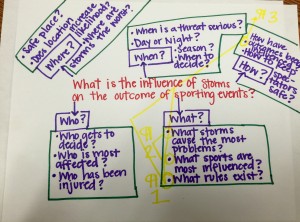 Students were then encouraged to start their own webs. Although it was completely unintentional on my part, this evolved into a great discussion about how you have to answer level one and level two questions before you answer the bigger questions. For the last half of class, I gave every student a sticky note.  They were directed to write their higher level research question on it.  We then met the other Language Arts classes in the library, where each student parked their sticky on their group’s poster.  We had a gallery walk, and students were able to look at everyone’s question.  Their instructions were to see if someone else picked the same topic but worded their questions in a more interesting way, or to see if there was a different topic entirely that seemed more interesting.  Even the first groups had at least seventy-five questions to choose from, and the last classes had over three hundred.  Students who found other questions wrote them on their Identify handout.

What past theories have been developed to explain the Northern Lights, and how have the lights affected tourism in areas where they can be seen?

How did the formation of the Ice Age Impact the Earth and humans?

How do bioluminescent waves affect the ocean and its inhabitants?

How have the discovery and exploration of blue holes impacted different fields of scientific research?

What myths about the cause of the rainbow are evident in cultural and religious traditions?

What is the relationship between disappearances at sea and the Bermuda Triangle?

Reflection: Emotional dip time! This is when it happened for everyone- teachers and students.  I thought the mention of an essay might cause it, but they really took that in stride. It’s hard to put my finger on the problem, but I think it maybe it was the switch from all the fun stuff in the beginning (at this point, we’ve spent about two weeks playing and having a great time) to having to make some serious choices.  Also, I think maybe we’ve over-used the gallery walk idea (back to the drawing board on that one!).  So we struggled with identify- I struggled, the kids struggled- but we just sat with it and let it marinate.  I don’t think I would make changes to stop the struggle- that’s where the learning happens.

The first thing we did in Gather was to have a lesson on finding credible sources  (I fully credit my best friend/ library mastermind Kelsey Barker with developing this lesson when we worked together a few years ago). We use an online tutorial, found at the link below, and an scavenger-hunt type of handout.  I don’t necessarily expect them to retain all the information- they complete the tutorial and then refer to the handout as needed while they look for sources. 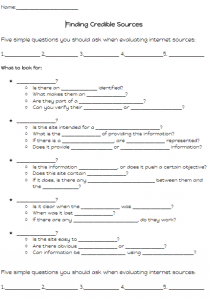 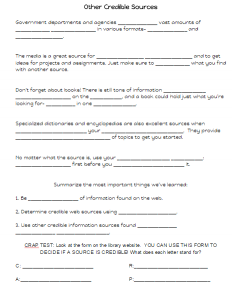 Once students were ready to head off in their separate gathering directions, we gave them instructions for taking notes.  We used this note-taking form, which is one thing from our old research life that worked so well we kept it: 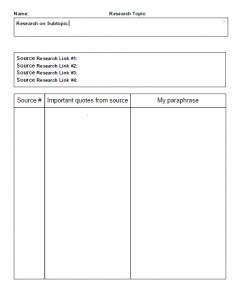 Students used a digital version and kept one document for each subtopic (body paragraph).  We required that they use at least two credible sources for each one, and that they find at least five significant quotes for each one and paraphrase each of them.  We spend a week in Gather, and during this time, I went from student to student and looked at their sources, checked for progress, and most importantly, helped make decisions about subtopics.

Reflection: What I liked about Gather was that the class sort of shifted from teacher-centered to student-centered. Instead of me providing the resources and controlling the agenda, the impetus was finally on them.  At the beginning, we were still struggling from Identify, but as the week passed and I walked my laps around the room, students began to speak with more and more confidence about their question.  Some questions evolved, and some changed entirely.  Some students needed a lot of guidance in coming up with their subtopics, and some barely looked up when I walked by.  If I had doubted all that time we spent in those first three phases (and I’ll admit to having my moments), here is when I was truly convinced.  What convinced me and won me over forever?  My favorite word- engagement. My kiddos were absolutely riveted by their choices.  Without a word from me, you could have heard a pin drop in my classroom.  Well, except for the occasional “Ms. Holden! Did you know it’s someone’s JOB to explode those frozen methane bubbles? LOOK at this video!”  If that’s what those two weeks bought me, I’ll take it every time.

And last, because that’s where we are in the process…

And here we are! My kiddos have been creating all week long.  For Create, students are writing a research paper.  Not a report (ugh, how I hate that word), but an interesting and dynamic essay, using their question as their thesis and detailing the conclusions they’ve come to, entirely on their own.

Reflection: This piece is almost entirely reflection, especially since they’re all still working and I’ve only seen bits and pieces of essays here and there.  First, I want to say that the decision to write an essay was not one we arrived at lightly.  When we started planning, we assumed we would, because that’s what we’ve always done.  As we moved through the institute and learned more, we had to ask ourselves if an essay was the best possible outcome of this unit- is that what our kids really need?  (We weren’t the only ones that asked, either.  When we presented our unit at the end of the institute, that was the only negative feed back we got- couldn’t our create be more creative?  Which is of course a completely fair question.)  But, when we looked at the work our kids have done and the things they’ve learned this year, we arrived at the conclusion that yes, the best thing we could do for them before we sent them off to high school is to make sure they’re prepared for the writing they’ll have to do when they get there. That’s not to say we don’t value creativity- I have student work all over my classroom that speaks to the contrary.  We just really felt that to do right by our students, they needed that research paper experience.

So, now you’re completely up to date on our unit.  I’m excited to move on to the final phases, as well as to start planning our next inquiry unit (here’s looking at you, Terri!).  I’ve had so much fun sharing our unit with you, and the opportunity for reflection has been terrific.  I’ll be back tomorrow for my final post!