Remember this charming critter from my last entry? My Guided Inquiry Design mascot? This creature is a Pompeii Worm, and the reason it represents the power of GID, to me, is that this animal was selected by one of our Grade 4 students as the subject of his Guided Inquiry project on animal adaptations. 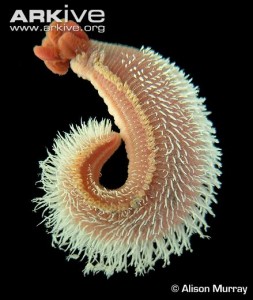 If you’re an elementary teacher, I’m sure you’ve encountered an animal project in some form. You know the drill… the kids choose an animal and do a little report on it: what it eats, where it lives, etc. This kind of project is a nice introduction to research skills, and because most kids are interested in animals to some degree, there is high motivation. You will find that the vast majority of students will pick pretty standard animals. Wolves. Zebras. Sharks.(Note: when I was in Grade 3, I chose echidnas, thus cementing my nerdiness for years to come. I digress.)

However, it is a truth universally acknowledged that at least 55% of your class will choose cheetahs.

Look, I have no problem with cheetahs. They run fast. Their claws are unretractable. They hunt gazelles. They are endangered.  Their cubs are ridiculously adorable.  Cheetahs are LEGIT. I get the appeal. Kids LOVE them.

But they are so… predictable. I’m sure you’ve marked dozens – nay, hundreds! – of cheetah reports in your professional life. It’s time to move on. Wouldn’t you rather learn about something a little different? A little out-there? For instance… a Pompeii worm?

A cheetah’s got nothing  on a Pompeii worm. (I mean, fine, a cheetah would easily take one down  if, say, a Pompeii worm somehow found itself stranded on the Serengeti. No contest there. I’m speaking more ontologically.) 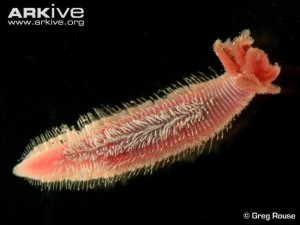 These guys live in the deep sea in hydrothermal vents. The end of the worm that sticks out in the water has to endure near-freezing temperatures in the frigid water of the deep ocean. So? Lots of organisms live in the deep ocean. The really cool thing about Pompeii worms is the end of the worm that’s in the vent has to contend with blasts of hot water that can be as high as 80 degrees Celsius, or 176 Fahrenheit. How does it survive in this environment? Most animals would poach themselves within seconds, yet these worms thrive in such a hostile environment because of bacteria that live on their bodies that help to regulate their temperature!

How did we discover Pompeii worms? Well, Guided Inquiry guided us to them! The whole process was important, but because we leveraged the power of the first three phases – Open, Immerse, Explore – for this unit, the students were able to explore some carefully curated resources about animal adaptations and make notes on different adaptations and animals that have them. In this way, the boys were exposed to a vast array of animals that they might not know about, and successfully carry out their research. Rather than designing the project around teacher-led discussion on adaptations, the boys discovered the concept on their own and built knowledge themselves.

The provincial learning objective for this Grade 4 science unit was: “All living things and their environment are interdependent.”  The instructional team – the Grade 4 teachers, our wonderful Inquiry resource teacher and myself – decided that the students should learn about how different environments can affect the adaptations that animals have developed to survive. These would be independent projects culminating in an animal “fact file” with a labelled diagram and paragraph. 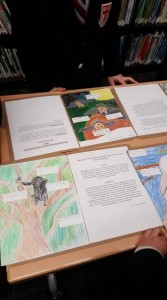 We started the OPEN phase by projecting a panoramic Google maps photo of Dinosaur Provincial Park in our neighbouring province of Alberta. This park looks very different from our own local temperate rainforest, so we had the boys brainstorm and discuss questions about the environment there. What kinds of animals might you find there that you wouldn’t find in Vancouver? Why? We then went out to our wooded area to take photos with iPads. This OPEN activity got the boys thinking about how environments can impact plants and animals.

We timed this project around the boys’ first overnight outdoor education trip, which became their IMMERSE phase. They spent two days at a local outdoor centre, where most of the programming revolved around adaptations of local flora and fauna. Full disclosure: I did not attend. I stayed warm and dry, but from all accounts, the experience was highly IMMERSive!

After they returned from camp, we set up the EXPLORE phase. Instead of letting the boys go nuts on Google, or wreak havoc on my painstakingly arranged 590s shelves, we gave them only one option: a brilliant website from BBC Nature: Animal and plant adaptations and behaviours This site has an exhaustive list of adaptations, with an easy to read description for each and multiple examples of organisms. We put the boys into Inquiry Circles and had them browse the site, noting down on a specially-created worksheet any animals or adaptations that they thought were interesting.

Because this BBC site has such an exhaustive list of adaptations, and because we gave them free range to browse the site, the boys were learning about everything from behavioural adaptations such as swarming, to feeding strategies like kleptoparasitism! Thus, one young man discovered the Pompeii worm, neatly filed away under symbiosis. His curiosity was piqued. What the heck is a Pompeii worm? (Probably what you were thinking at the beginning of this post!)

After a couple of sessions exploring the BBC site, we helped the boys review their notes and IDENTIFY an animal they really wanted to learn more about, and to write a strong research question about it beginning with “Why” or “How”.

From there, we provided more curated resources for GATHER: the BBC site again, ARKive, World Book, and in some cases, reliable websites that I vetted for those boys who chose an unusual animal with scarce information available.

They CREATEd their fact files and we SHAREd with a big celebratory class session involving small-group informal presentations and a gallery walk of all the files. Finally, the boys were EVALUATEd on the science learning objective as well as a self-assessment on the whole process.

The results? The boys were so motivated and excited each week when they came to the library. The learning was student-centered with each boy striving to answer his own question, instead of following a list of criteria from the teachers. Those pesky note-taking skills were a breeze to teach, and the science learning objective was hit out of the park (ask one of our Grade 4s about any possible adaptation – they know them all!)

Those are all very noble, altruistic goals for the betterment of our darling students. Allow me to be selfish for a moment – of 48 projects completed there was not a single one on cheetahs. If that’s not a career highlight, I don’t know what is.