As I alluded to in yesterday’s post, British Columbia has recently introduced a brand new curriculum, which my school started to roll out in the 2015-2016 school year with some pilot units. By the 2016-2017 year, we were expected to be fully teaching the new curriculum.

The new curriculum, which can be found here , is quite a bold endeavour. Instead of focusing purely on content, students are instead expected to develop “curricular competencies” across all subjects, with a set of overarching “core competencies” – personal traits such as critical thinking, creativity and social responsibility – that are self-assessed.

Each subject has a set of between four and six Big Ideas – the broad understandings that students should gain. Below the Big Ideas are Content – what is being taught – and Curricular Competencies – the skills and attitudes students need to be able to demonstrate.

Analysing and discussing our new curriculum could be a whole blog in itself, so suffice it to say that it has caused a lot of reflection, planning and imagination at schools across the province. Overall, I really like it. I think it lends itself beautifully to Guided Inquiry Design, cross-curricular learning, and individual interests. There are, however, an awful lot of learning outcomes to be addressed, and much of the wording is vague.

Despite the fact that there is less emphasis on content, there have nonetheless been massive changes in the content taught in different subjects. I will get into this more in my next post about our Grade 6 project, but in almost every core subject, our teachers have had to introduce different content to align with the provincial standards. In Grade 4, one new addition to the science curriculum was the Big Idea “All living things sense and respond to their environment” with the content expectations surrounding the five senses.

The Grade 4 teachers, Vickie Lau and Guy McAuliffe,  met with me and our inquiry based learning teacher, Graeme Webber, to brainstorm some ideas for an interesting unit on the senses – not just in humans, but in other animals as well. As it turned out, we didn’t know a whole lot about how other animals use their senses… how could we make an engaging project so the boys could ask questions, build their knowledge, and showcase their learning in a unique way? The five senses are an interesting topic to think about teaching, because kids know what they are – but how much do they truly understand about the sensory systems of other animals? What organs and structures in animals and humans are responsible for sensing stimuli? What seemed like a pretty straightforward topic actually had many interesting avenues we could take!

Initially we played with the idea of a full Guided Inquiry unit which would allow each student to explore the senses according to his interests, but we determined that this might be challenging given the timeline, our own teaching schedules, and student abilities. Eventually we came up with the idea of having a weekly mini unit comprised of an Immerse/Explore session for each sense based on our library’s very successful Human Library program. We would invite a guest expert in each week to talk about one particular sense, then give the boys time to journal, ask questions, and later explore a LibGuide about animal senses that I would create.

Based on past Human Library events, we had a wonderful supply of guest speakers we could call on. We invited a dog trainer who specializes in scent detection work, our school’s contract vision and hearing consultant, and a marine biologist in to give presentations on smell, sight, hearing and touch respectively. But what about taste? We debated for some time and decided that we could do that ourselves. We set up stations in the library with a salty, sweet and bitter taste tests, and had the boys determine where on their tongues they could identify each flavour.

As has come to be expected with any GI unit we do, student engagement was very high. Ann, the dog trainer (and a retired elementary school teacher) set up some experiments to test the boys’ sense of smell compared to that of her dogs. Linda, the hearing and vision expert, demonstrated how technology can help people with vision and hearing deficits, and Melanie, the marine biologist, enchanted the students with how creatures of the deep oceans are able to use touch to find prey. (We teachers also ran a pretty fun taste test!) Questions came fast and furiously; the boys recorded lots of ideas from both the presenters and their LibGuide explorations. The depth of understanding went far beyond our expectations. 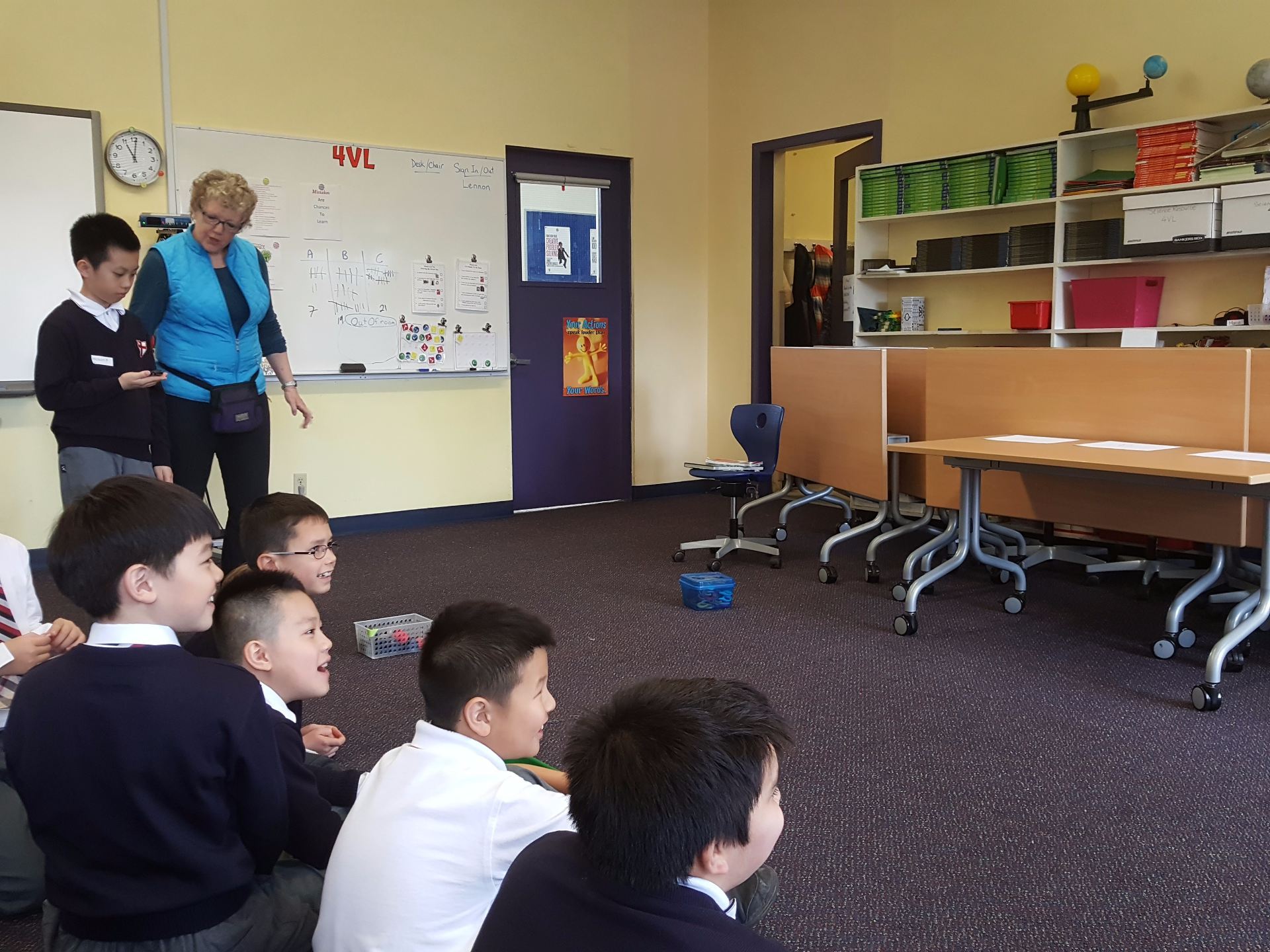 Ann sets up a test of human scenting abilities! 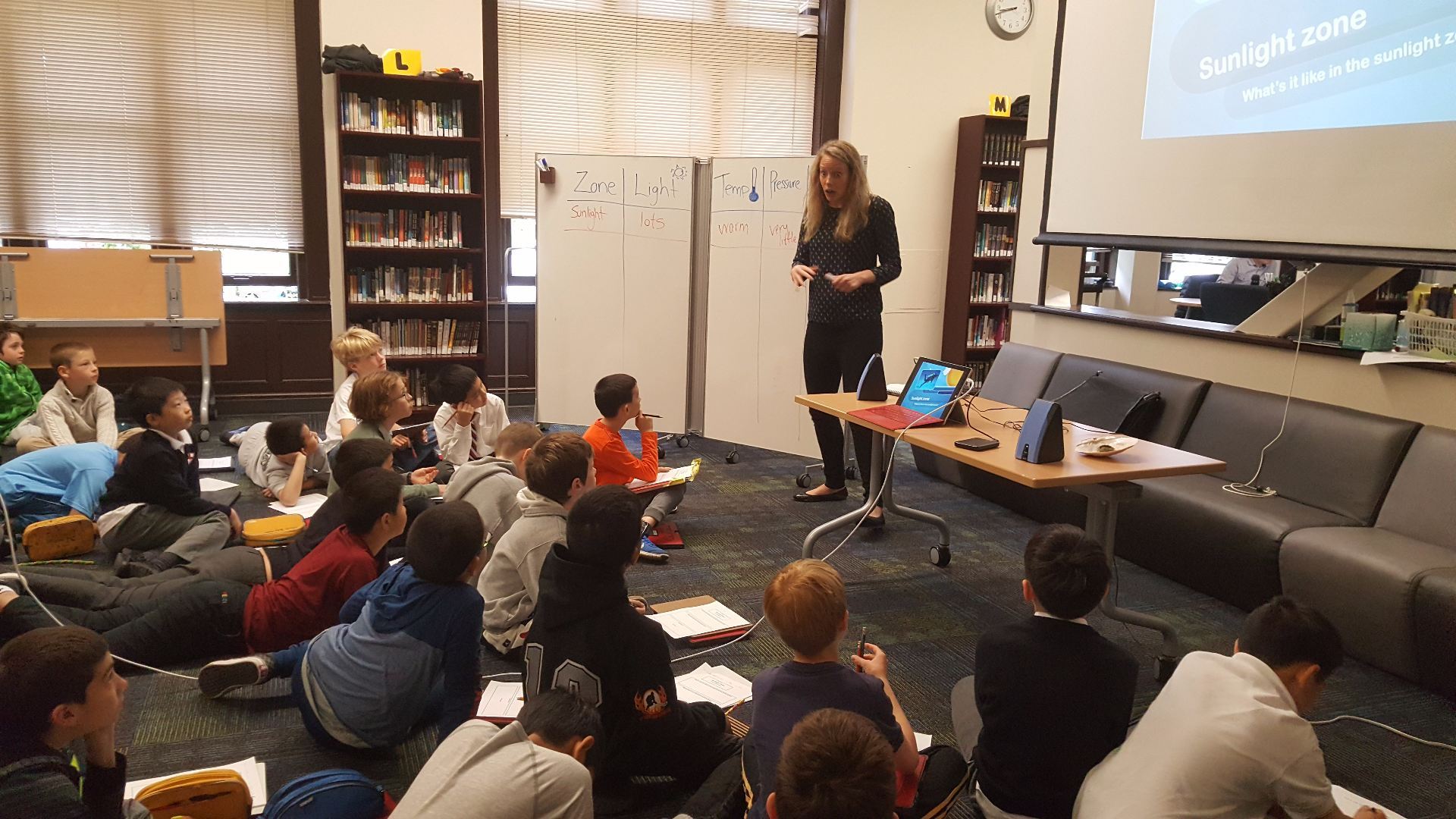 Melanie explains the different zones of the ocean. 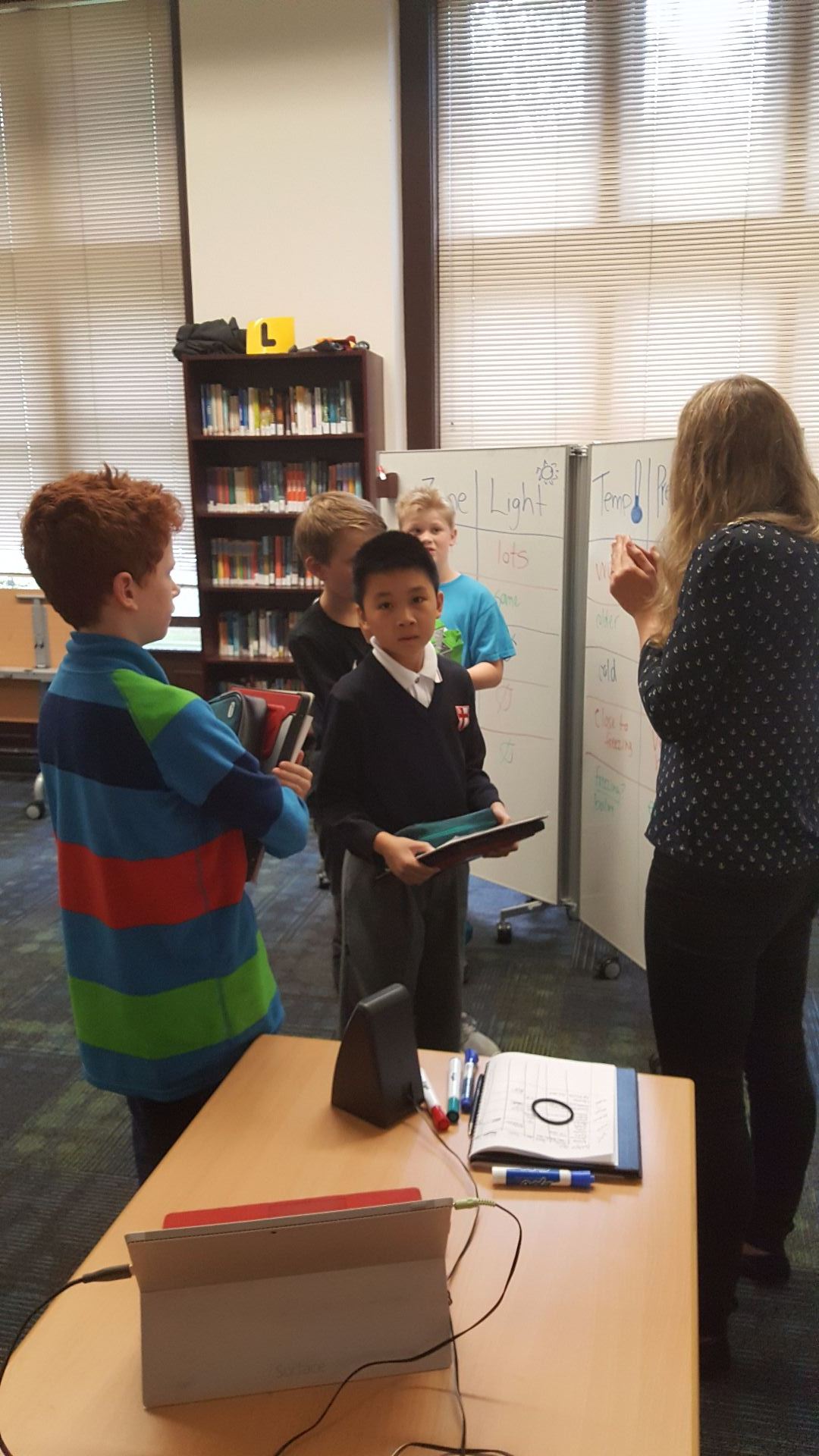 Boys could not wait to ask Melanie more about marine animals.

Based on the BC curriculum, the boys certainly demonstrated the following curricular competencies through this unit:

But then an important question came about: how can the students share their new knowledge about the senses? Because we structured this unit as a series of Immerse sessions, each student received the same experience and heard the same information. They all read the same resources on my LibGuide. We did not move beyond the Explore stage into identifying individual inquiry questions, so preparing oral reports or posters would be rather tiresome with each student giving the same information.

Guy, who teaches Language Arts, had a brilliant idea to add a cross-curricular piece to this unit. One new L.A. curricular competency is oral storytelling:

This was, so far, not something Guy had been able to cover in his classes, and he had not had any ideas of how to teach it. What if the boys synthesized their understanding of the five senses and turned it into an oral story about an animal they learned about during our sessions? And what if, rather than performing his story live (thereby experiencing potential performance anxiety and squirrelly audiences), each boy videoed himself so that everyone could have a chance to listen and watch?

This turned out to be very successful – Guy provided examples and instruction in oral storytelling during L.A. classes and gave the boys time to prepare and practice their stories. Using their school laptops, each boy filmed his story and saved it. We then hosted a celebratory Share session in the library: each boy brought his laptop, and we spread them out around the space with headphones and evaluation sheets. We gave everyone time to listen to as many of their classmates’ stories as possible. It was a wonderful celebration of their learning and a really unique way to evaluate each others’ understanding of the five senses. For the Evaluate phase, Guy made a peer evaluation form that was left at each laptop, so students could leave feedback on their classmates’ stories. 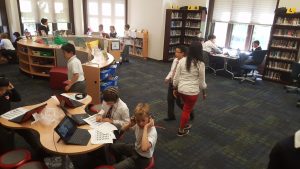 Both classes rotated around the library to listen to the stories 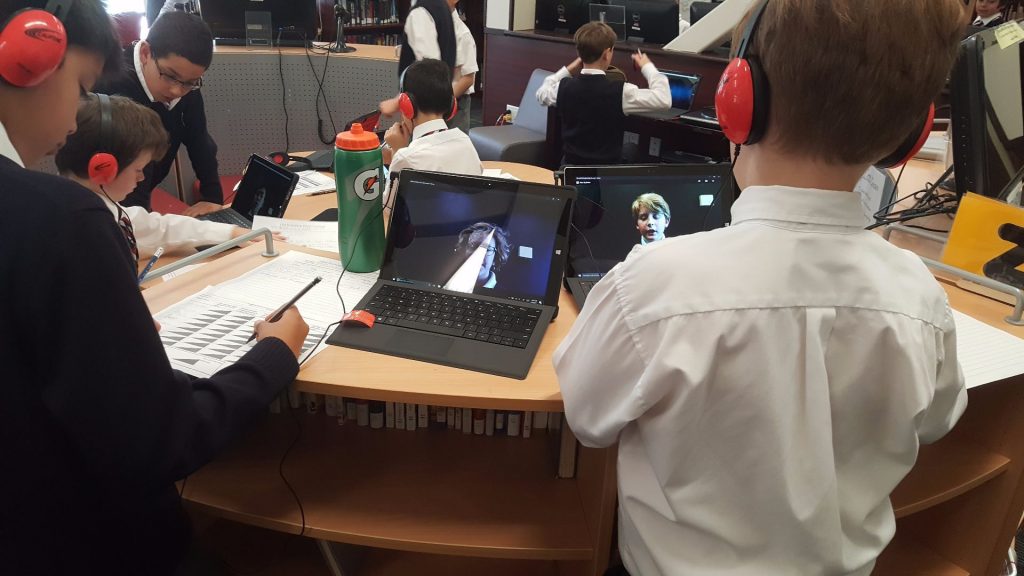 Boys listen to each others’ oral stories and leave feedback

My next and final post will be a look at our Grade 6 Guided Inquiry project – also based on new curriculum, and also leveraging the power of the Human Library!